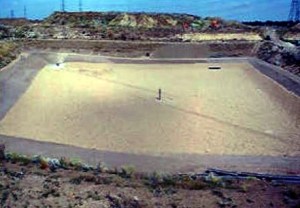 When designing any leachate management system the assessment of the most economic method for leachate treatment and disposal is heavily dependent upon the flow rate and duration of flow. A high capital cost option such as on site leachate treatment will be worthwhile, but only if the total volume the plant treats daily is sustained for a number of years, long enough to pay back all the invested capital.

If the landfill does not produce the expected flows, when pumped out, the leachate treatment plant may prove costly, as in the long run, it might have been cheaper to pay higher per unit volume tankerage costs and avoid the capital spent.

UK Leachate scientists Keith Knox and Philip J Shaw, published a paper which was persented at the Waste Conference held in Stratford Upon Avon in the UK, in 2006, where they described a study they carried out on this over a period of 6 yers from 2000, to 2006. the paper was called; “A study of the hydraulic response of landfills to infiltration events”

The project led to several useful observations on the hydraulic behaviour of landfilled MSW, including:

1. The effectiveness of the gravel drainage layer at equalising heads across the base of the cell remained unaffected after more than five years. Thet reported that here remained no evidence of any differential response to hydraulic events, on any part of the drainage layer. The landfill was provided witha complete blanket of drainage stone over the whole area of the base, with “herrinbone style” leachate collection pipes laid out across the fllor and surrounded by the drainage stone. This acts as a justification for the UK EA’s requirement for such stone drainage blankets over the full basal area, as in the past with only stone surrounded drainage pipes laid in “herribone style” layouts across the floor, without the stone drainage blanket over the whole area, the ability to drain the whole of the waste was not present.

2. They found lag time for infiltration events in the range 20 to 50mm of rainfall on the surface to reach the base of the wastes started at less than 12 hours for 2m of MSW. It increased to about 2 days by the time there was 5m of waste.

However, once the waste depth had reached ~9m, rainfall events of this intensity produced no discrete response at the base of the wastes, leading instead to a prolonged slow rate of drainage to the base. They thought that this indicated the extent of attenuation of natural hydraulic events in fresh waste.  It was not been possible to examine response times to larger, or more localised events such as large volume re-injection of leachate. Nor was it possible to examine any change in behaviour as the absorptive capacity of the wastes became used up.

3. The drawdown induced by discrete episodes of leachate abstraction enabled them to produce estimates of the rapidly drainable porosity of the wastes. For fresh MSW (up to 1 year old) at depths up to a maximum of approximately 25m, these estimates ranged from 2.5 to 6.5%v/v with an average of ~4.6%v/v.

They considered that a single value of 1.6%v/v obtained after 5 years appeared to indicate a large decrease in drainable porosity over that period. This they considered would be expected, due to settlement and degradation.

4. Draining down of leachate from the waste continued long after the rapidly drainable flow had been abstracted from the sump. This they said had been demonstrated by periods where abstraction had been
suspended, following draw-down.

Examples in this study show drain-down continuing for at least 48 days, to 2.1m, indicating that there was an ultimate drainable waste porosity significantly greater than the rapidly drainable porosity.

For the leachate management experts who carry out water balances to assess leachate volumes generated by landfills under these circumstances, the percentage by volume of drainable leachate found was close to the values in use in the industry. However, the findings did, and still do show how difficult it is to accurately forecast leachate yields.

Certainly, one point made in the paper, and which should not be missed is that once mixed MSW has been left to stand with leachate, that water becomes much less rapidly mobile. Other researchers have shown that due to the greater compression forces at depth within wastes the permeability of the waste reduces markedly. 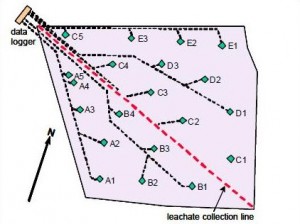 This no doubt goes some way to explaining how the volume of leachate removed from the waste after it had stood in the wastes for longer, came to be less within the time-scale of the study. Some leachate management system designers have in the past assumed that quite soon, often within months, after the whole site has been capped the rate of leachate generation will fall back, whereas in reality this is seldom seen and the effect is a much more gradual reduction in leachate flow out of the landfill, after final restoration.

In addition, although after final restoration capping, leachate flow rates may be reducing with the passage of time, as the authors report that the leachate rapdily drainable porosity reduces, so will the leachate strength rise.

We hope that this article has assisted you in your understanding of the manner in which landfills react hydraulically to rainfall by the production of leachate, however, for a full understanding we strongly recommend that you study the original research papers and you certainly must do that before basing any decisions on the contents of this article.