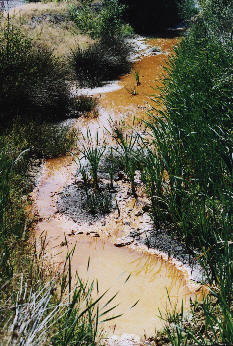 Rain falling on the top of the landfill is the main contributor to the generation of leachate, and is by far the largest contributor for modern sanitary landfills which do not accept liquid waste. In old unlined and un-engineered landfills, some leachate is produced from groundwater entering the waste. Some, additional leachate volume is produced during waste decomposition, and some additional surface water will sometimes run onto waste from its surroundings.

The decomposition of carbonaceous material produces some additional water, and a wide range of other materials including methane, carbon dioxide and a complex mixture of organic acids, aldehydes, alcohols and simple sugars, which dissolve in the leachate cocktail.

The precipitation percolates through the waste and takes in dissolved and suspended components from the biodegrading waste, through physical and chemical reactions.

Most landfills are designed to minimise the amount of leachate they create during their lifetimes. However, there are good scientific reasons to suggest that it would be better to flush all landfills out and to do this, would produce more leachate, faster. Landfills where the latter philosophy is adopted, are called, “bio-reactor” landfills. In Europe, bioreactor landfills are effectively prohibited by EU directives, leading them to be called “dry tombs” by some, due to their rapid capping, and minimised leachate production.

The environmental risks of leachate generation arise from it escaping into the environment around landfills, particularly to watercourses and groundwater. These risks can be mitigated by properly designed and engineered landfill sites. Such sites are those that are constructed on geologically impermeable materials or sites that use impermeable liners made of  geotextiles  or engineered  clay . The use of linings is now mandatory within both the United States and the European Union, except where the waste closely controlled and genuinely inert.

Most toxic and difficult materials are now specifically excluded from landfill. However, despite much stricter statutory controls the leachates from modern sites are currently stronger than ever. They also contain a huge range of contaminants. In fact, anything soluble in the waste disposed will enter the leachate. Within the lists of substaces present in leachate are very low concentrations of “trace contaminants” which can have quite strongly contaminating effects. These are nowadays most often derived  from materials in household and domestic retail products which enter the waste stream perfectly legally.

Unfortunately, the leachate draining from most landfills will continue to reflect the contaminants of past years, when regulatory controls were less.

These substances in include extremely low concentrations of heavy metals (for example from batteries), herbicides and pesticides (as used in gardens), etc. However, leachate is becoming less contaminated with difficult substances as time goes forward, and public awareness, recycling and increased statutory control over these substances, throughout the industrialized world is making leachate less harmful in this respect.

The concern about environmental damage from waste leachate, largely arises from its high organic contaminant concentrations and much higher ammoniacal nitrogen than commonly found in any other organic effluent.  Pathogenic   microorganisms and toxic substances that might be present in it have in the past been described as the most important. However, pathogenic organism counts reduce rapidly with time in the landfill, so this only applies to the youngest leachate and leachate is seldom removed from the landfill in this condition.

One of the most comprehensive scientific studies yet undertaken worldwide on leachate, was published by the United Kingdom, DOE., in 1995. It is titled: “A review of the composition of leachate from domestic wastes in landfill sites”; Department of Environment Research Report No. CWM 07294, and still provides much essential data on the range of contaminands present in Municipal Solid Waste, and Commercial and Industrial Waste landfill leachate.