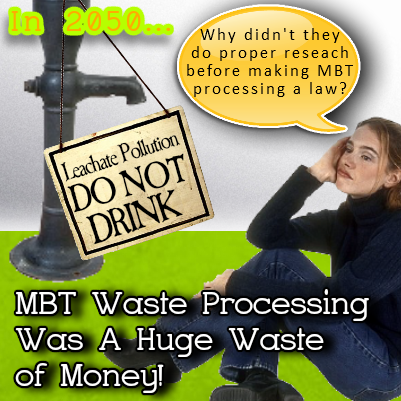 In a research project completed on behalf of the UK Environment Agency data was collected data and leachates were sampled from EU landfills that had received imports of MSOR (Mechanically Sorted Organic Refuse) and Mechanical Biological Treatment (MBT) wastes, several years ago.

The results of the sampling exercise were analysed for, the presence of trace quantities of heavy metals, and an extensive range of trace organic substances, from sites containing MBT wastes that have received different degrees of composting pre-treatment.

The intention was to find out to what extent the pre-treatment, largely by removing organic content from the waste, would be likely to affect leachate quality which future landfills receiving an ever larger proportion of these pre-treated wastes will produce.

This article provides a brief discussion of the results reported in the paper titled; “Leachate quality from landfilled MBT waste”, and presented by H.D. Robinson1, K. Knox2,B.D. Bone3 and A. Picken.

Leachates produced from MSOR wastes have a very high polluting potential, but biological pre-treatment of these wastes can avoid the peak acetogenic phase of decomposition, and produce leachates similar to, or weaker than, those from conventional methanogenic landfills.

Effective MBT processes can also significantly reduce concentrations of trace organics, and of ammoniacal-N in leachates. However, the relative importance of nitrification/ denitrification processes, generation of stable, organically-based nitrogen forms, and other routes which occur during MBT processing are not well understood.

It will be important to use MBT systems during waste pre-processing which optimize reactions to remove nitrogen if the ultimate goal of the pre-processing stage, which is to minimize the potential impact on the environment of the leachate these sites will produce in future.

Why Leachate Quality from Landfilled MBT Waste is Important

The European Council Directive on the Landfill of Wastes 1999/31/EEC (LFD), placed a requirement on member states to implement strategies to ensure the amount of biodegradable municipal waste deposited at landfill is progressively reduced over a 15 year period, and now only 35% of the total amount produced in 1995 will be permitted to be sent to landfill after pre-processing at city and regional waste facilities.

The LFD also requires member states to only landfill wastes that have been subjected to treatment and incineration, leading to a reduction in their quantity or hazard to human health or the environment. Mechanical and Biological Treatment (MBT) (after pre-sorting and recycling to remove organic content), and incineration of municipal waste has been increased substantially in the UK, and throughout the EU states, in order to achieve these objectives, and most waste now being landfilled has been pre-treated to remove the organic content.

The conclusions regarding future leachate strength from the study

The study confirmed that very high strength organic leachates would be generated if MSOR fractions of household wastes were landfilled without pre-treatment, and that:

However, such practices are not ever likely to be permitted and this simply illustrates that efficient Mechanical Biological Treatment of the MSOR fraction is essential if any benefit is to be found, and the study showed that MBT can considerably reduce the organic strength of leachates, avoiding the acetogenic phase, and more rapidly producing leachates similar to those from MSW landfills in methanogenic phases of decomposition.

Nevertheless, levels of “hard” COD in these leachates, not readily biodegradable by aerobic or anaerobic processes, are typically at least as strong as, and often stronger than those found in methanogenic leachates from ordinary landfills – often in the range 1000 to 4000 mg/l, in spite of BOD values which are frequently less than 100 mg/l.

Concentrations of ammoniacal-N and Kjeldahj-N in MBT leachates may be significantly lower than those from conventional MSW landfills, but the extent to which this occurs is variable, and not mecoprop), evidence from this study is that effective composting processes are able to reduce con-centrations significantly.

In practice; the extent of removal of mecoprop from leachates, may well be a good surrogate measure of the efficiency of the composting process itself, to which waste fractions have been subjected.

Similarly, AOX values were very much lower in leachates from composted wastes, although there is doubt as to whether this is of any value in assessing risk from any specific trace organic compounds in these leachate samples.

In general terms, many landfills receiving MBT wastes will continue to pose risks to groundwater, and require aftercare periods similar to conventional MSW landfills that have become methanogenic.

There is no doubt that MBT processes have potential to reduce both organic strength, and concentrations of ammoniacal-N in leachates from such landfills, as well as the total mass release of these and other contaminants. However, even at such landfills, the extent to which timescales over which leachates will require management can be reduced significantly, remains to be determined.

Our expert view is that although the potential for serious pollution impacts from landfill leachate will be reduced to a degree, by the lower volume of this waste being landfilled this benefit is unquantified.

Future pre-processed landfilled municipal waste will remain in need of leachate treatment, and as the hard COD is extremely difficult to treat without high energy use, the problem of future groundwater pollution endangering water supplies is not removed.

So, as the benefits of the very expensive waste processing now being undertaken throughout the EU (to comply with the EU landfill directive), which is costing the taxpayer billions of pounds annually, have never been costed for their environmental benefit, current MBT/ waste processing practice based upon the EU legislation is completely unjustified, and very likely is nothing but a huge waste of money.