Press Release: At a landfill’s leachate treatment centre, where floating biomass was reducing the plant’s throughput, the introduction by Viridian Systems of a new mixer has created annual savings on chemicals of around £85,000. From sludge taking well over two hours to settle (with unnecessary amounts still floating), it has now been reduced to less than 30 minutes. With the plant set up for two batches per day, this potentially adds back three hours of treatment time per day, which equates to more than 14,000m3/year of leachate that no longer has to be tankered off-site; equating to a further annual saving of £285,000. Before installation of the Landia mixer, Viridian Systems found that the leachate treatment plant was adversely affected by floating biomass up to 500mm thick.

‘The right amount of agitation’

“To solve the problem for the leachate treatment plant”, he said, “we believed that with the correct type of mixer; suitably positioned, powered and timed, the right amount of agitation would disperse the floating layer to allow solids to settle much more quickly”. 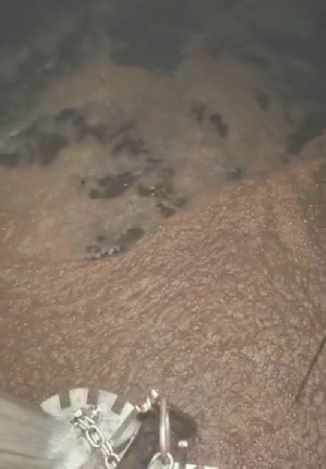 The Landia mixer ensures that there is no floating biomass.

“Undesirable filamentous bacteria, which is one of the main causes of floating biomass, is detrimental to SBRs, but working closely together with Landia, who have vast experience in mixer applications, the sub-surface liquor is now degassed; meaning no more floating biomass”.

As the plant began to produce far less unwanted foam, Birkenhead-based Viridian Systems asked the plant operator to gradually reduce dosing with a de-foaming agent (antifoam) until the consumption rate falls to around 1-2 drums/month, instead of 2-3 drums/day, which will not only save around £70-100k/year but will also reduce the dissolved organics (measured as chemical oxygen demand C.O.D.) in the treated effluent.

Furthermore, the installation of the Landia mixer has also enhanced the reliability of the plant’s Dissolved Oxygen (D.O.) (optical) probe, because there is less foam to blind it. With the probe now working as it should, there is better control of the blower speed, reducing its energy consumption, which in turn, offsets some of the power consumed by the mixer.

“Far from just supplying a mixer, Landia shared our goal in wanting to find the best possible solution. What has been achieved provides considerable ongoing benefits for our customer. As a result of this success, we have also installed a Landia mixer in a tank adjacent to the SBR”.