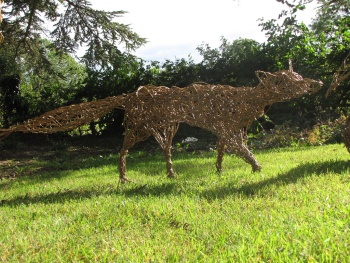 When is a willow coppice not a wood? When it is a landfill leachate treatment system.

To put it succinctly, landfills are containment facilities for the controlled deposit of waste, including household, commercial and industrial wastes that is at most landfills non-hazardous in nature. Frequently in the past in the UK, and elsewhere, they occupy previous mineral extraction sites, providing a helpful method of restoring land once mineral working has ceased. Nonetheless rainfall and groundwater pervading the rubbish heap liner, mixed with liquid generated from the roting contents of the landfill, make a liquid known as leachate.

The composition of the landfilled waste, dictates the quality of the leachate, which will normally contain dissolved organic chemicals, ammonia and metals. These will pose a big danger to surrounding land and watercourses that’s pricey to fix if contamination happens.

Leachate, unless a sewer is available with spare capacity, which is rare, must thus be picked up and treated before it can be discharged from any Municipal Solid Waste (MSW) landfill site, or alternatively it may be tankered off-site for treatment.

However, tankering is becoming ever more costly partly due to the rise in transport fuel costs. So, on-site treatment is in demand like never before.

There are many leachate treatment systems available, but the quest for less expensive, more viable strategies is ongoing.

The Environmental Protection Group of the world water and environment consultancy WRc, has reported on trials in running a field trial in Britain inquiring into the utilisation of short rotation coppice ( SRC ) willow to treat leachate.

This was a five-year project, on 2 landfills owned by RMC Aggregates L.T.D. in Hertford and Hatfield, it was funded by RMC Environment Fund through the landfill Tax Allowance Scheme. The Hatfield Landfill contains non-putrescible business / commercial wastes, and the Hertford site contains putrescible waste of similar origin, permitting the comparison of leachates with marginally different chemical compositions. For instance, the mean ammoniacal-nitrogen concentrations are ninety mg / one and two hundred mg / one at Hatfield and Hertford respectively.

Over 50 000 willow trees were planted on the two landfills, at densities of 12 000, 15,000 and 24,000 trees per hectare. For the first year, 1998, no irrigation was applied and the trees were simply cut back or coppiced to encourage strong growth in subsequent years.

Thru the summer growing times of years 2, 3 and 4, three treatments were allotted to 6 blocks of trees at every site :

Irrigation at both sites was controlled by soil moisture measurements – automatically at Hatfield and by hand at Hertford, so the liquid treatments were applied just when the soil moisture was below a stated level.

At Hatfield this authorized the applying of 2300 m3 of rubbish heap leachate onto one 3rd of the site over a period of 3 years. The lake water treatment was included to provide proof on the agricultural advantage of further water and nutrient elements from the leachate. An all inclusive monitoring program of inputs and outputs to the system was then carried out. This included manual sampling and research of leachate, lake water, soil and soil solution, field and ditch drainage, and plant tissues. Weather and soil moisture were also monitored immediately. the willow coppice trees were cropped by employing a self-propelled forage harvester at the end of the 4th year. Inspiring results were reported.

This research was published in 2005 and made available by the WRc through their publications department.

The most important result is that the trees irrigated with landfill leachate produced 20-80 percent more wood than the control trees, due to their water and nitrogen uptake.

If wood from the plantation E was reserved for use in soil amendments, or to fuel energy generation, this extra yield would be a serious benefit. Trials some place else are looking into the employment of SRC – both without delay as fuel and indirectly for gas production to drive turbines. The second outstanding result’s the swift – and virtually complete – conversion of ammoniacal-nitrogen in the leachate to nitrate-nitrogen, by nitrifying bacteria in the soil. This is critical because ammoniacal-nitrogen is the most environmentally damaging element of the leachates.

The system discharged just about no water in the growing season, due to evapo-transpiration of all of the water from both leachate and rainfall by the trees.

Nevertheless this zero discharge permitted salts to build in the soil in the summer, which afterwards leached out when the leaves fell. This brought about a top discharge of comparatively high salinity water early in winter. As the lately cropped trees will always soon re-sprout, WRc continued the trials to research whether tiny, controlled summer leaching of these salts would reduce salt buildup and improve the treatment efficiency.

The leachates contained only reduced amounts of heavy metals, in concentrations that were characteristic of each landfill’s size, degree of containment and sorts of waste deposited. The mean yearly mass of heavy metals ( lead, mercury, chromium, copper, nickel, zinc, cadmium and arsenic ) applied to leachate treated plots ranged between 0.09 to nine g / ha. These loading rates were significantly under ( 0.04-0.7 percent ) the maximum allowable rates of heavy metals that may be added yearly to soil in sewage sludge under current UK legislation. The absence of any discernible difference between the heavy metals concentrations in the soil of leachate treated and control plots after 3 years of treatment means that applying leachate didn’t increase heavy metal enrichment of the soil or the cropped wood.

The applying of leachate to SRC willow permits water and nutriments to be preserved and recovered from a waste stream while simultaneously creating a crop to provide earnings for the landowner. The system is especially OK for agricultural locations where landfills might be found at a big distance from sewerage or treatment works.

More info about the project was at the time (2005) available by getting in touch with WRc through their website www.wrcplc.co.uk, but a recent search on that site brought up no results. It may still be possible to obatin this research report through reference libraries or by contacting WRc.

UPDATE: Now (in 2011) there are a number of short rotation willow coppicing leachate treatment sites in use and more planned. Contact Us for more information by using the form on our Contact Page.