Landfills in the UK, built before the mid 1980’s were typically designed on a principle of dilute and disperse (EA, 2001/ Brown Book).

Legislation changes which started in the 1990s, have increased the basic requirements of landfill design to require additional controls to remove this type of disposal method.

However, a few currently active and many closed sites still rely on a principle of dilute and disperse.

Background to the Concept of “Dilute and Disperse”

Once upon a time, the amount of waste generated was considered small enough to be diluted in the environment. But that changed as waste quantities rose.

With massive industrialisation and urbanisation, a new concept followed this somewhat optimistic view.

It was replaced by the principle of “concentrate and contain”. Its objective was to eliminate the waste or at least protect the population from its grasp, which generally involved either incineration or disposal in landfills. In most countries today this is still the solution. via WASTE MANAGEMENT – UNEP

Design of historical landfill sites was directed by the ‘dilute and disperse’ principal, where emissions were accepted provided sufficient dilution occurred in the underyling strata, based upon the flux of groundwater below the waste, and attenuation capability of biological filtration within natural soils. This was known as the attenuation zone, and it was intended to be an aerobic organic filter which may also have provided pollutant reduction by cation exchange.

Operational Practices were based upon dispersing liquid wastes equally within the waste mass where liquid wastes were also co-disposed in these landfills, to avoid over-loading the attenuation zone (biological filtration zone) commonly 1 to 3 meters in depth.

Operational practices were generally poor, and no attempt was made to control leachate generation or build up of landfill gas. [However, in those days the presence of landfill gas was minimal due to lower putrescible matter in the waste, and smaller poorly compacted sites, which were consequentially less likely to turn methanogenic.

It is now accepted practice for a modern landfill to be developed and operated on an engineered “containment” basis, to isolate the wastes and to prevent any adverse impact on the surrounding environment. The key feature of such a facility is the containment of any leachate generated within the site, and as necessary, to abstract any excess leachate from the site for safe treatment, recirculation and/or final disposal.

The containment measures also serve to prevent landfill gas migrating from the site and presenting an unacceptable risk. The containment system is achieved by engineering the sides and base of the site and by lining these with low permeability materials such as naturally occurring clays and/or synthetic geomembranes.

Upon completion of infilling, leachate generation is further reduced by the installation of a low-permeability cap.

In addition, leachate generation must be controlled during the operational phase by filling in cells sized on the water balance principle. For example, for the US,  as described in the Environmental Protection Agency (EPA) Guidance on Landfill Site Design (EPA, 2000). This involves infilling in discrete cells which will be brought up to final level in succession and capped and restored as quickly as possible.

The EU Directive on the landfilling of Wastes (1999/31/EC) is also based on the concept of containment, specifying equivalent maximum allowable permeabilities and minimum thickness for the mineral component of containment systems. via Design of historical landfill sites 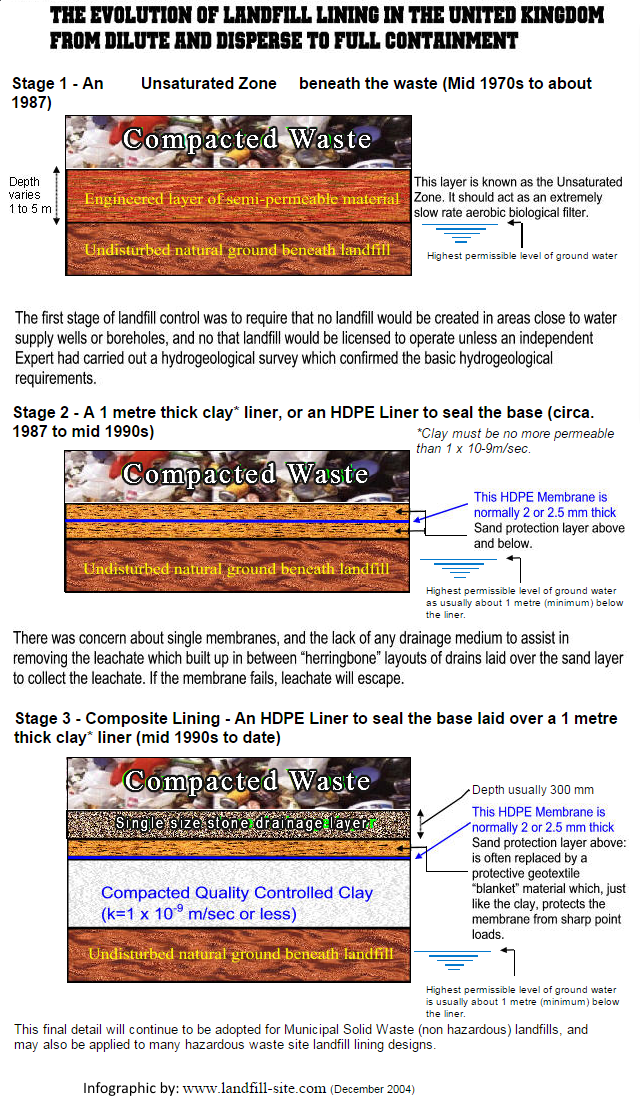 via The History of Landfill Lining Design [Infographic] 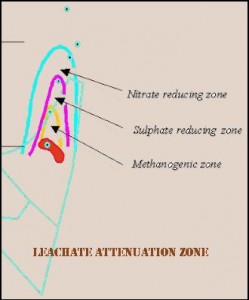 A leachate attenuation zone is essentially a buffer zone around a landfill that protects against contamination of groundwater by its pollution from dangerous or hazardous wastes. Lots of older landfills were developed before stricter laws were implemented have been described as having “leachate attenuation zones”. In the UK these types of landfills which were most common before about 1990, were blamed for leachate escapes into groundwater used for drinking water abstraction, and came to be called not the safe “dilute, [attenuate] and disperse” landfills their designers intended, but just simply “dilute and pollute” landfills! Unfortunately, there was much truth in such a description, in many cases.

Leachate attenuation zones are, in other words, areas of the ground around and below those landfills which don’t have low permeability linings, in which leachate seeps out and, biological action, in what are called the “unsaturated” or “aerated/ aerobic” zone outside the landfill in permeable ground, reduces the polluting potential of the leachate by actually treating it.

It the right types of geology with the right amount of permeability and soil types these attenuation zones can be very effective and provided free leachate treat. Unfortunately, unless these leachate attenuation zones are very well designed by engineers, hydrologists, and hydro-geological scientists, they rarely work well when they occur by chance. However, they can be designed into new unlined landfills if the ground around the landfills and water levels in the ground and flux of flow through the ground is suitable. The path length within the attenuation medium and rate of flow is also very important.

Landfills are the most extensively made use of method for the disposal of solid waste around the globe. When water from rainstorms or melting snow percolates with the decaying natural and inorganic waste of these landfills, it becomes polluted. All land fills produce this kind of pollution, also leachate is still produced from landfills that have actually been closed and deserted for years. Generally, one volume of landfill waste generates between 50 and 100 gallons of very tainted wastewater called leachate.

Landfills are different from other groundwater contamination sources because after wastes are buried, a series of physical, chemical and biological responses happen that intensify the poisonous concentration of the waste that runs off as leachate. In uncommon instances, entire new mixtures are produced.

The usual leachate from a landfill has high concentrations of ammoniacal nitrogen and reasonably high recalcitrant mixtures, that may sometimes also include halogenated hydrocarbons such as carbon tetrachloride and methylene chloride, and complex polymers, plus heavy metals that are not degradable. Of these toxic toxins, the conversion of the organic nitrogen in living cells, into ammoniacal nitrogen produces what is not only a long-lived toxic liquid, but also a liquid which is also highly harmful to most aquatic species.

To alleviate the problem created by the development of a  leachate attenuation zone, or a plume of pollution in the ground, government organizations may buy property nearby to a landfill to set up a leachate attenuation zone. This is a way of ensuring that no wells or boreholes are built within the zone, which if they were present would deliver contaminated and undrinkable water.

The Importance of Regular Monitoring Leachate of Attenuation Zones

After a landfill is developed which has a leachate attenuation zone, water quality monitoring must done regularly in the  leachate attenuation zone to measure the pollution in the ground around the waste, to ensure that the saturation of leachate in the soil does not spread into areas feeding wells or boreholes, and check the extent to which the level to which impurities have actually entered the location’s surroundings.

Preparation for mitigation locations and leachate containment techniques should always be done before a landfill is built. A number of factors, including topography, geology, the risk of ground leaks from the structure and into groundwater used for drinking, and groundwater to be protected in case in future it is needed for drinking, ought to be considered before locating a landfill site.

Anaerobic Digestion of Landfill Leachate for Energy Generation: Pipe-Dream or an Opportunity?
How Do You Treat Leachate?