Anaerobic digestion is becoming increasingly popular in this age of high energy prices, and many more people are realising that whereas aerobic treatment systems consume large amounts of expensive energy, anaerobic digestion is a process which does the opposite. In fact it produces a net energy output. 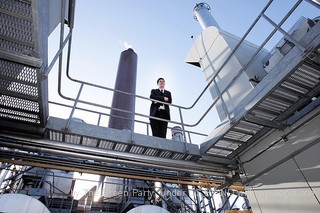 It is not surprising therefore, that many are asking whether leachate can be treated anaerobically, and wouldn’t there be plenty of energy such a plant could produce? Instead of being a heavy cost burden, surely it might even turn a profit!

At first it may seem to be a strange paradox that such a highly organically rich wastewater is in fact consistently being treated aerobically throughout the waste and water industry, not just in the UK but throughout Europe, the US, and most other nations. This is happening in dedicated biological plants and in public sewage works, yet landfill leachate is surely an ideal ”biogas making” feedstock?

Based upon the very high organic content of most leachates, by changing over to AD surely using AD for the leachate treatment process should be self funding? In fact with current generous UK Feed-in-Tarrifs (FITs) and the Heat Initiative, it could be a no brainer to use AD for leachate treatment?

So Could Anaerobic Digestion of Landfill Leachate for Energy Generation Really Work?

AD Plants require a high capital investment which is higher than for aerobic treatment plants. In order to achieve payback a biogas plant will need to be operated at close to its design throughput for at least 8 and probably 10 years, and the quality of the feed flow into the AD Plant needs to be reasonably consistent in flow rate and the quality of the leachate. AD Plants are far more sensitive to this than aerobic treatment systems.

Unfortunately, not only is landfill leachate hugely variable in its strength and quantity, only one type of leachate is capable of producing the necessary large biogas yield. That leachate is the fresh leachate from new aerobic landfill cells. In modern landfills, new cells once started within a landfill turn anaerobic within a year to eighteen months of being opened for infilling, and as soon as that happens they start to produce landfill gas. The anaerobic processes within a landfill mimics closely the biological activity within an AD Plant. The landfill produces landfill gas which is largely the same in its composition as biogas.

Once a landfill cell starts to produce methane, there is a rapid reduction in its COD along with a number of other contaminants. And, without getting technical about the processes involved, it is fairly obvious that those reactions which would have created biogas in an AD Plant also begin to occur as soon as the change from aerobic to anaerobic takes place in the new landfill cell, and from that point on the “methanogenic leachate” produced from the landfill is of little biogas value, as it has already been digested anaerobically and produced its biogas within the landfill.

So, an AD Plant to treat leachate would not only suffer from variations in volume through the process, the life of an AD Plant for each new cell is no more than 2 years at best. This is a long way short of the 10 years needed to justify the investment. Also, landfill design is such that cells are often built one above the other. A new cell above older methane producing waste will commonly never produce a “young” leachate, because by flowing through into the methanogenic zone it will be digested from the start and produce no AD Plant “biogas producing” (acetogenic) leachate.

As if that was not enough, a further problem is that AD ”treatment” is a misnomer here, as the AD process will not significantly reduce some of the most potentially environmentally damaging constituents of landfill leachate, such as the ammonia concentration. So, an AD Plant for leachate treatment would need to be followed by an aerobic process designed principally to remove the ammonia (ammoniacal nitrogen).

Suddenly prospects for AD look quite different and far less auspicious. If anyone has an answer so that a landfill could be made to provide a reliable supply of fresh leachate suitable for high AD Plant gas yields, we would love to hear from them.

There is certainly plenty of organic matter within young leachate to produce a lot of biogas, if it could all be extracted quickly enough before the landfill becomes a landfill gas producer. Back in 1990, this was realised in the UK, when “The Times”, edition of 1 November 1990 ran a feature on “Free Energy in Your Dustbin”, by Mike Hurrell.

At the time the WRC (Water Research Council – funded by the UK Water Industry) had been studying this and their Dr Chris Young is quoted as saying that;

“A fully-developed average-sized county council landfill might produce 100 cubic metres of leachate each day [in the UK]. According to Dr Young anaerobic digestion of this in an [AD] plant … could produce enough methane to power a 1 megawatt generator which could produce electricity for 600 homes, while the largest [landfill] sites could support a generator six times that size.”

This may be theoretically correct, but sadly this is highly unlikely to ever happen for the reasons given above. The views of our readers are as always appreciated, when provided as comments.

One Response to Anaerobic Digestion of Landfill Leachate for Energy Generation: Pipe-Dream or an Opportunity?